Horn antennas are the gift from ancient astronauts

Sometime in autumn 2017, a few private Facebook groups of wireless networking professionals having a heated discussion about the origin of horn antennas, asked me to share my knowledge on the topic. I was surprised by the level of ignorance and lack of knowledge of historical evidence, as well as surprisingly poor argumentation among wireless technology professionals. I was approached by a group of enthusiasts and friends of mine, and agreed to perform a comprehensive study on ancient wireless telecommunications, specifically focused on Horn antenna technology.

It is commonly taught that one of the first horn antennas was constructed in 1897 by Bengali-Indian researcher Jagadish Chandra Bose in his pioneering experiments with 60 GHz microwaves. Other popular misconception is that the modern horn antenna was invented independently in 1938 by Wilmer Barrow and G. C. Southworth. The development of radar technology in World War 2 stimulated modern-era horn research to design feed horns for radar antennas. The corrugated horn invented by Kay in 1962 has become widely used as a feed horn for microwave antennas such as satellite dishes and radio telescopes.

There is no doubt, that the above mentioned gentlemen performed research and constructed antennas. However, historical evidence clearly shows that Horn antennas are a much older invention, and were brought to our planet by ancient visitors.

The idea that intelligent extraterrestrial beings visited Earth and made contact with humans in antiquity and prehistoric times is often called pseudoscience. There are numerous artifacts proving that this contact influenced the development of modern cultures, religions, and technologies. Some of my colleagues share a common opinion that deities from most, if not all religions, have extraterrestrial origin. They believe that advanced technologies brought to Earth by ancient astronauts were interpreted as evidence of divine status by early humans.

It is widely understood among ancient astronaut research circles, that ancient visitors to planet Earth used various advanced forms of wireless radio frequency communication, which required equally advanced antenna apparatus. Wireless communication was critical for ancient astronauts to survive in potentially hostile, un-mapped environment. Historical evidence suggests that ancient astronauts used remotely controlled flying vehicles and were able to perform wireless data, as well as audio-visual communication. These are apparently the source of their belief in their godly nature and miraculous abilities.

There is a strong base of evidence supporting these arguments, yet, it remains unmapped and unknown to most of the public. Let me point out the most important artifacts known to mankind, that I have discovered.

The stone carvings of Val Camonica (Camonica Valley) are located in the Province of Brescia, Italy, and constitute the largest collection of prehistoric petroglyphs in the world. The collection was recognized by Unesco in 1979 and was Italy's first recognized World Heritage Site. Unesco has formally recognized more than 140,000 figures and symbols, but new discoveries have increased the number of catalogued carvings to between 200,000 and 300,000. The petroglyphs are on all surfaces of the valley in the areas of Darfo Boario Terme, Capo di Ponte, Nadro, Cimbergo and Paspardo, and are approx 3000 years old.

In the summer of 2018, I performed detailed research of around 28,000 carvings in Capo di Ponte and Cimbergo with surprisingly convincing results. Let the pictures speak for themselves: 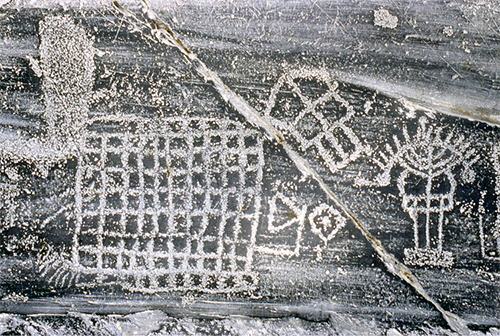 Pic. 1 Shows ancient network coverage map with inhabited area covered by a single horn antenna. Note the possible backhaul apparatus co-located on the same infrastructure. The meaning of the large structure on the right is not clear, however, a possible explanation is that the landscape is divided by the river diagonally, and the large structure on the right represents main tower infrastructure or similar elevated apparatus, possibly with heavy co-location of antennas pointed towards the sky. 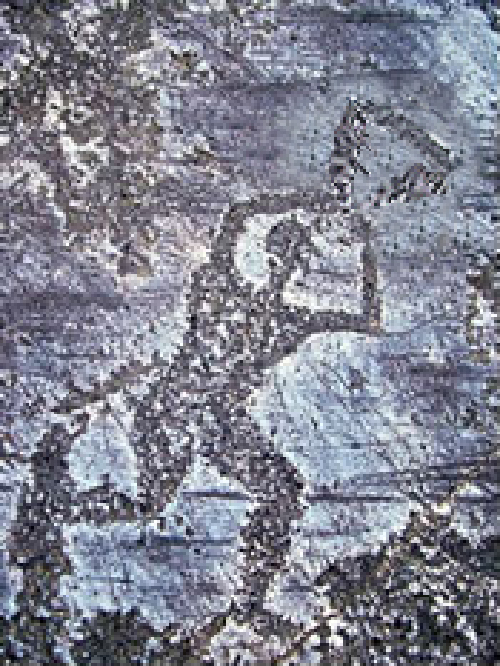 Pic. 2 Here is a detail of a larger carving showing an ancient field engineer in the wild nature performing site survey, holding a horn antenna. It is unclear, why an advanced civilization, capable of space and unmanned flights, use relatively rare, qualified manpower for such a risky job. 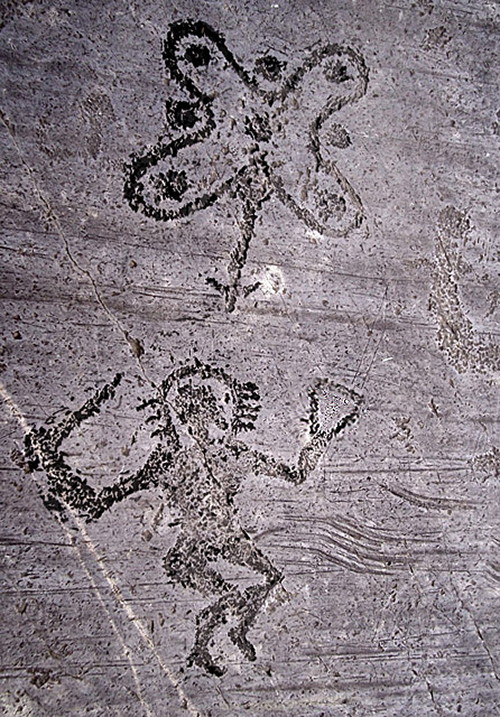 Pic. 3 Another carving depicting ancient field engineer in the wild nature performing site survey while holding a horn antenna. The person is shown wearing protective headgear and a weapon, pointed towards a cluster of elevated wireless infrastructure. Alternative view of professor Zimmerman suggests, it is rather a depiction of a flying apparatus used for the site survey job. The dating of the carving may support his hypothesis. 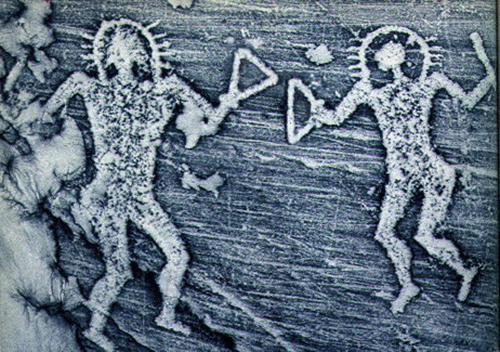 Pic. 4 Stone carving shows two ancient engineers measuring whose horn is bigger. It is unclear, what is the purpose of this ritual. Considering the figures are depicted in movement wearing protective headgear, the theories include religious, social or leisurely character of this exercise.

Pic. 5 Measuring whose horn is bigger - another carving with similar depiction.

The Anunnaki (also transcribed as Anunaki, Anunna, Ananaki, and other variations) are a group of deities that appear in the mythological traditions of the ancient Sumerians, Akkadians, Assyrians, and Babylonians. Descriptions of how many Anunnaki there were and what role they fulfilled are inconsistent and often contradictory. In the earliest Sumerian writings about them, which come from the Post-Akkadian period, the Anunnaki are the most powerful deities in the pantheon, descendants of An, the god of the heavens, and their primary function is to decree the fate of humanity. 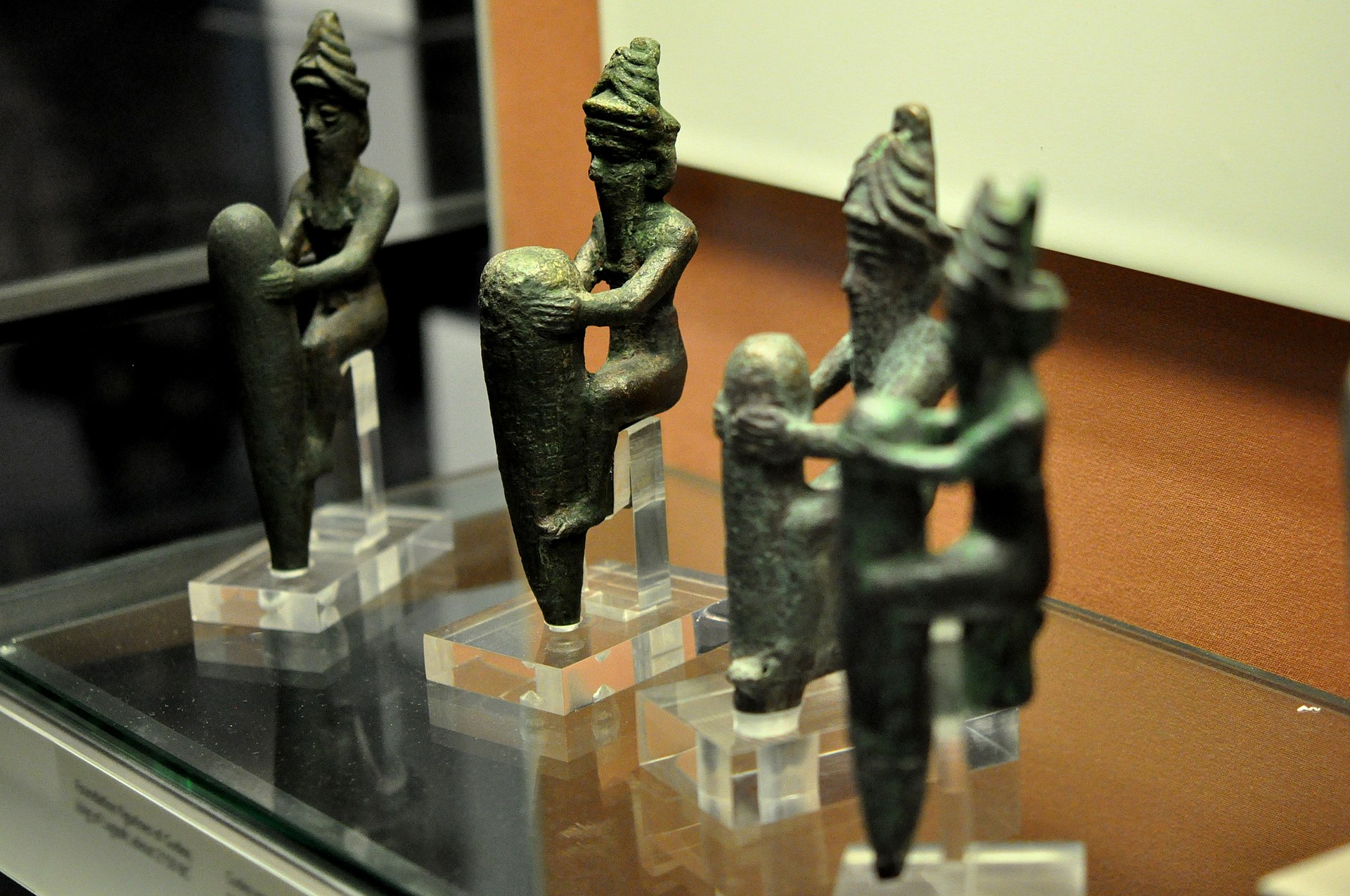 Anunnaki appear to have been heavenly deities with immense powers. Deities were almost always depicted wearing horned caps, consisting of up to seven superimposed pairs of ox-horns. They were sometimes depicted wearing clothes with elaborate decorative pictorial ornaments. Theories suggest, this evolved into modern time nerdy dress code represented by T-shirts with pictures and inscription.

Ancient mythologies support viewpoints based on the idea that ancient creation myths of gods who descend from the heavens to Earth to create or instruct humanity are representations of alien visitors, whose superior technology accounts for their perception as gods. Almost scholarly examples supporting this idea are reactions of isolated cultures when exposed to western technology. For example, in the early 20th century, "cargo cults" were discovered in the South Pacific. These cultures believed Western ships and their cargo were sent by the gods as fulfillment of prophecies concerning their return. Annunaki are not the only example of ancient use of wireless communication and particularly Horn antennas. In Hindu mythology, the gods and their avatars travel from place to place in flying vehicles (see Vimana). There are many mentions of these flying machines in the Ramayana, which was used by Tamil king Ravana from Sri Lanka dating back to the 5th or 4th century BCE.

Below are some examples:

Is not the wondrous chariot mine,

…This chariot, kept with utmost care,

Will waft thee through the fields of air,

And thou shalt light unwearied down

From Book 6, Canto CXXIV: The Departure:

Swift through the air, as Ráma chose,

The wondrous car from earth arose.

And decked with swans and silver wings

Bore through the clouds its freight of kings. 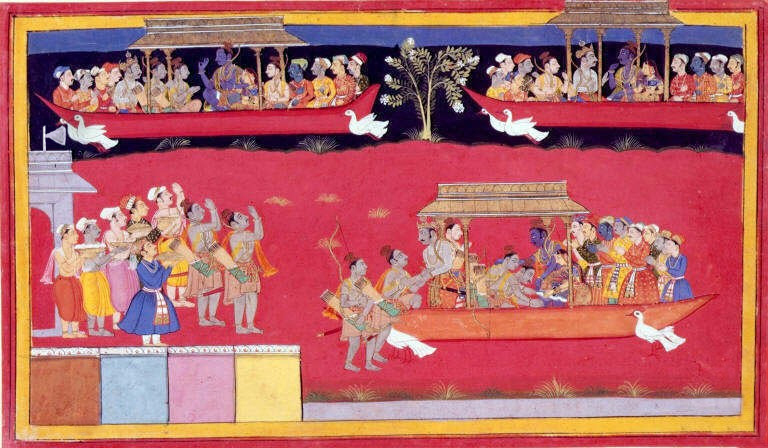 Pic. 7 Rama being welcomed upon his return to Ayodhya in king Ravana's flying chariot Pushpaka Vimana. Note the horn antenna discreetly placed on the temple roof to the left.

Erich von Däniken discusses the Ramayana and the vimanas in Chapter 6 of ‘Chariots of the Gods?’ suggesting that they were "space vehicles". To support his hypothesis, various arguments are used. The most recent discovery performed by Me is historical painting of Rama being welcomed upon his return to Ayodhya in king Ravana's flying chariot Pushpaka Vimana, where it is clear the ancient horn is discreetly placed on the temple roof. It is more than obvious, that the horn antenna was the part of communication apparatus of extra-terrestrial origin that was used to communicate with flying “space vehicles”.

The most recent artifact discovered by Me and presented in my groundbreaking Article is the famous Rosetta Stone - granodiorite stele, found in 1799, inscribed with three versions of a decree issued at Memphis, Egypt, in 196 BC during the Ptolemaic dynasty on behalf of King Ptolemy V. The top and middle texts are in Ancient Egyptian using hieroglyphic script and Demotic script, respectively, while the bottom is in Ancient Greek. The Rosetta Stone proved to be the key to deciphering Egyptian hieroglyphs, thereby opening a window into ancient Egyptian history. 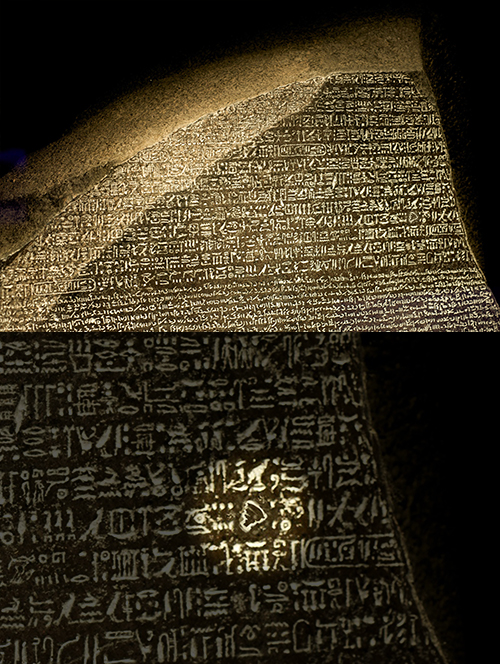 Pic. 8 Rosetta stone - ancient egyptian hieroglyph of horn antenna. Some theories suggest it was generally a symbol of communication.

Historical evidence clearly shows that Horn antennas are ancient invention of an extra-terrestrial origin. Horn antennas and most probably wireless telecommunications in general were brought to our planet by ancient visitors as the gift to our civilization. The idea that the gift was vastly premature has no strong opposition in scientific circles. Complex nature of wireless and lack of common understanding of its basic principles among terrestrials even after thousands of years of adoption are another firm argument of the above mentioned statements. After centuries of adoption, wireless technology is mastered by only a few individuals displaying extraordinary skills and endurance.